Tight credit restrictions can prevent consumers from getting a mortgage and making a home purchase. But over time, tight credit can impact a consumer’s expectations of the mortgage application process, reducing their willingness to even apply for a mortgage or to start the home search process.

In a report released this week [1], researchers at the Federal Reserve Bank of New York provided estimates of the change in applications for mortgages in February of 2014 as compared to May of 2013. Their estimates indicate that:

o    Applications for mortgages fell sharply over this period for consumers in all FICO brackets.

o    The uniform impact is likely due to the nearly 80 basis point increase in mortgage rates over this time frame.

o    The mortgage application rejection rate fell for all groups except those with FICOs below 680. 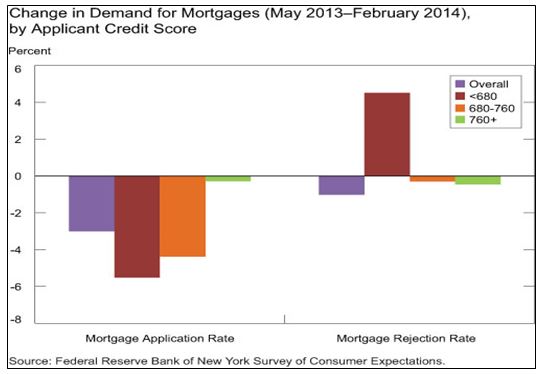 When surveyed in February about their plans to apply for a mortgage over the next 12 months:

o    Pessimism among borrowers with FICO scores below 680 increased as respondents who expected to apply for a mortgage also expected an increase in the 6% rejection rate.

o    All other groups expected a decline in rejections. 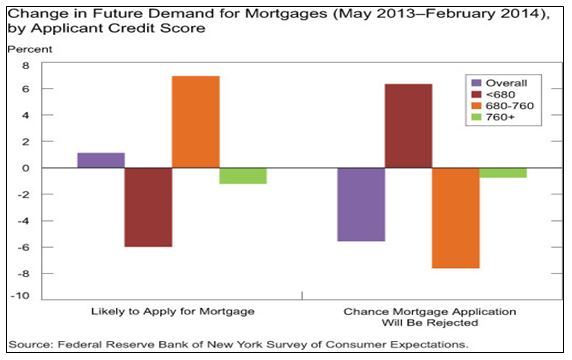 In recent weeks, some lenders have indicated a willingness to return to traditional, well-underwritten lending in the lower FICO spectrum. However, these efforts may be in vain without a more fundamental recognition from consumers. Lenders may need to trumpet these efforts in order to draw well-qualified, but discouraged, potential homeowners back into the market.